City Park Players is pleased to open the 2017 Season with two hilarious one-act plays, by James McLure (a native of Alexandria, LA), depicting life in a sleepy Texas town.

Laundry and Bourbon, directed by Kathy Parker, is set on the front porch of Roy and Elizabeth's home in Maynard, Texas, on a hot summer afternoon. Elizabeth is a housewife whose husband, Roy, has been missing for two days. She is visited by her two gossiping pals, Hattie, whose children create chaos wherever they go, and Amy Lee, born into poverty but now married to money. Drinks are imbibed, and secrets are revealed.

Lone Star, directed by Wanda Schenk, takes place outside a bar on the outskirts of Maynard, Texas.  The story follows Roy as he deals with the emotional and psychological trauma of the war by reminiscing about his past, his 1959 pink Thunderbird, drinks, and squabbles with his younger brother Ray (who worships him), and Amy Lee's husband, Cletis ( who also worships Roy).  Roy loves three things in life:  his wife, his country and his car – not necessarily in that order.

Laundry and Bourbon and Lone Star are set to run February 9-19, 2017 at the Hearn Stage at Kress Theatre, in downtown Alexandria, Louisiana.  Thursdays-Saturdays at 7:30pm; Sundays at 2:30pm.

2017 Brochure/Poster Ready for Mail Out!

Our gorgeous new 2017 brochures will be mailed out soon! These are actually mini-poster size, and will be perfect to put up in a prominent place to remind you of show dates and audition times. The Season Membership forms are separate this year, and easy to mail in with your season subscriptions and donations. It's going to be an exciting year of theatre!!!

Please email, call in, or send your address(es) so we can be sure you get one of these beauties! 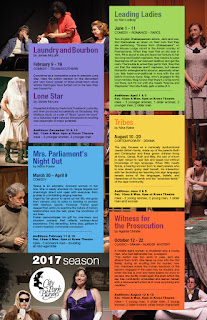 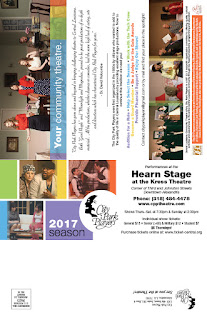 Posted by Unknown at 1:54 PM No comments:

Additional monetary support comes from our patrons and donors and people like you who believe that community theatre enriches our lives and enhances our quality of life.